In Kazakhstan, Pope Francis is expected to appeal for peace in Ukraine

How are Gen Z Mormons doing with mental health?

Orthodox church in the Hamptons calls people with autism…

Jewish pilgrims gather in Ukraine despite the perils of war

VATICAN CITY (RNS) — Pope Francis will be traveling to Kazakhstan, a country nestled between Russia and China, on Tuesday for a “pilgrimage of dialogue and peace,” as he attends a summit of global religious leaders. But the Russian Orthodox Patriarch Kirill’s recent cancellation casts a shadow over the pope’s hope to mediate peace in the Russia-Ukraine conflict at the gathering.

“It will be an opportunity to meet many religious representatives and dialogue with brothers, moved by the common desire for peace, a peace our world thirsts for,” Pope Francis told the thousands gathered at St. Peter’s Square for his Angelus prayer on Sunday (Sept. 11).

The pope will be visiting the majority-Muslim and Orthodox country from Sept. 13–15 to take part in the interfaith Congress of the Leaders of World and Traditional Religions, which meets once every three years to promote peace and tolerance. The event will take place in the pyramidal Palace of Peace and Harmony in the Kazakh capital of Nur-Sultan, where participants are expected to sign a joint document.

The Grand Imam of al-Azhar, Ahmed al-Tayeb, with whom Pope Francis signed a document promoting human fraternity in 2019, and the chief rabbi of Israel, David Lau, will be among the religious leaders at the event.

The last pope to visit Kazakhstan was Pope John Paul II, who came to the country in 2001 at a time of political turmoil, following the 9/11 terrorist attacks in the U.S. Francis visits the country amid similar tensions as the East and West once again collide in Ukraine. The pope and the Vatican have made every effort to remain impartial on the conflict, with a hope of acting as a mediator in the war even as the opportunities for dialogue grow increasingly slim.

At first, the pope hoped his relationship with Kirill, cemented during their historic meeting at the airport in Havana, Cuba, in 2016, might provide a way in for dialogue. But the Orthodox leader has offered a theological basis for the Russian invasion of Ukraine by emphasizing its religious unity with Russia. A meeting between Francis and Kirill in Jerusalem scheduled for last summer was canceled, and when the pope warned the patriarch over a video call in March about becoming “Putin’s altar boy,” the relationship seems to have chilled.

In August, the Orthodox Patriarchy in Moscow announced Kirill would not be attending the interfaith congress in Kazakhstan. Meanwhile, Francis has sent Cardinal Konrad Krajewski, charged with dispensing papal charity, to Ukraine to express his support for its beleaguered people.

Russia will loom over the interfaith gathering regardless. “Kazakhstan has very strong political and economic ties with Russia and China,” said Bishop Adelio Dell’Oro of Karaganda, Kazakhstan, during an online meeting with journalists on Friday (Sept. 9).

Dell’Oro explained that while there were initially tensions between the sizable Russian and Ukrainian expat populations in the country, they have dissipated. “I saw unity in the dioceses I visited,” he said. In the multicultural and multireligious context of Kazakhstan, the bishop believes the pope can still find fertile ground for his message of peace at the congress.

“Obviously this forum seems like a place where the pope can certainly amplify even more his message for peace and concord,” he said, adding that participants likely expect Francis to deliver such a message. 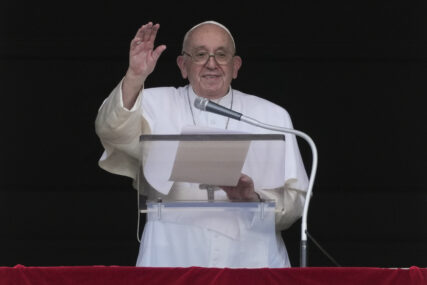 Pope Francis delivers his blessing as he recites the Angelus noon prayer from the window of his studio overlooking St.Peter’s Square, at the Vatican, Sunday, Sept. 11, 2022. (AP Photo/Andrew Medichini)

The pope’s visit to Kazakhstan also coincides with the arrival of the Chinese president, Xi Jinping, to the country in his first foreign visit since the pandemic. While a meeting between the two is highly unlikely, Vatican observers believe that representatives from both delegations might take the opportunity for dialogue.

Not only is China’s role in the Russia-Ukraine conflict significant, but the Vatican has its own questions to settle with the People’s Republic. Sino-Vatican relations have been historically fraught, with Catholics in the country divided between official and unofficial, or “underground,” congregations with their own bishops. The Vatican signed a provisional deal with China in 2018 on the appointment of bishops, which is up for renewal.

Vatican officials were recently in Tianjin, China, to discuss the accord, but the future of diplomatic relations between the countries remains uncertain. Chinese authorities have detained human rights activist Cardinal Joseph Zen, former Catholic bishop of Hong Kong, who will stand for trial on Sept. 19. Zen has been a vocal critic of China’s human rights violations and the Sino-Vatican deal, especially the power it gives Beijing in the selection of bishops.

The pope’s visit might provide an opportunity for the Vatican to at least be heard by Chinese authorities. “Kazakhstan will increasingly become a passageway for China toward the West,” said Guido Trezzani, director of the Catholic charity network Caritas in Kazakhstan, during an online press conference on Wednesday (Sept. 7).

Trezzani hopes that beyond any diplomatic efforts and appeals for peace, Pope Francis will also reinvigorate the small Catholic population in the country. Trezzani has been working to provide charitable help to the poor, the disabled and the elderly in the country, but the local church has been struggling to engage with other faith groups.

He said he hopes the pope will meet with some of the vulnerable people the church has been helping in Kazakhstan, which would send a powerful message to the country. “We need his words to understand how to get out of the ‘things have always been done this way’ mentality,” he said.

How are Gen Z Mormons doing with mental health?

Jewish pilgrims gather in Ukraine despite the perils of war

In hometown of St. Francis of Assisi, pope touts ‘radical criticism’ of capitalism