Harry Kane marked his 400th appearance for Tottenham with a goal from the penalty spot in a 2-0 victory over Everton, which moves Spurs just one point behind Premier League leaders Arsenal.

Frank Lampard’s visitors frustrated Tottenham throughout the first half and passed up two golden opportunities of their own, with Demarai Gray and Amadou Onana blowing one-on-one chances. “If we took one of those, we probably don’t lose the game,” Lampard said afterwards.

But Jordan Pickford – moments after a stunning stop from Kane at the start of the second half – made a costly error, spilling a shot from Matt Doherty and then bringing down the Spurs striker as he scrambled to recover.

Kane (59) scored and missed from the spot in the Champions League on Wednesday, but there were no nerves as he thumped home his penalty in front of the South Stand. With nine goals in 10 games, Kane is enjoying a superb start to the season and he has now scored in five Premier League games in a row for the first time. 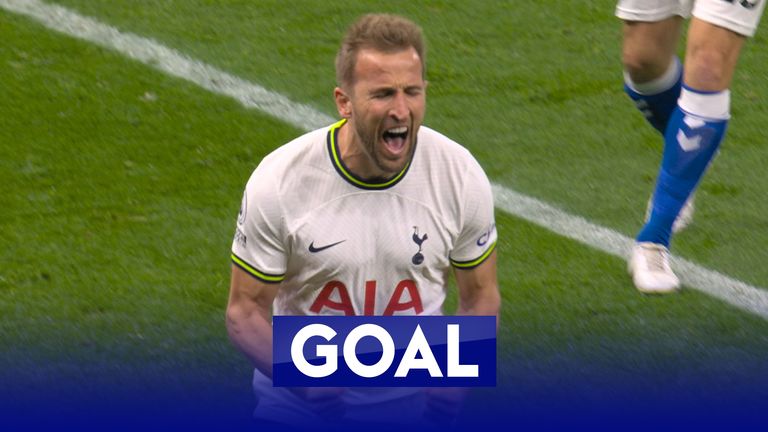 It was a less rewarding evening for his fellow Spurs forward Richarlison, who had seen his reunion with former club Everton cut short by then due to a calf injury. However, Antonio Conte took Richarlison’s exit as an opportunity to switch to 3-5-2 and the home side extended their 100 per cent home record for this season with some authority from then on, with Pierre-Emile Hojbjerg wrapping up the win with a deflected finish on 86 minutes. 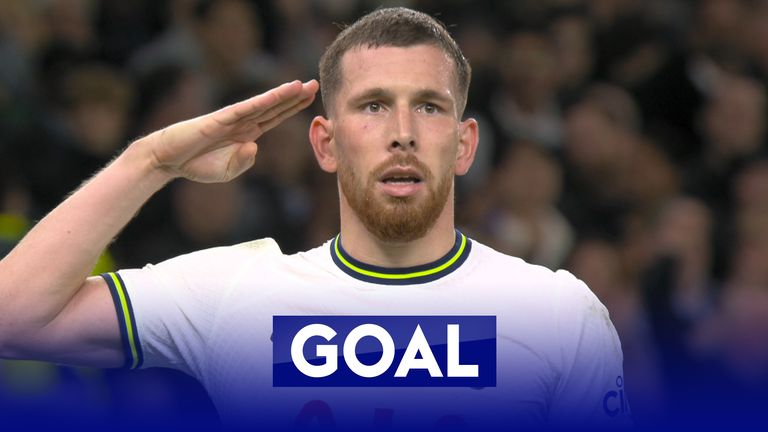 Spurs have made their best start to a Premier League season after 10 games and, although they remain third, they are now level with second-placed Manchester City ahead of their trip to Liverpool on Super Sunday, while Arsenal’s game in hand comes at Leeds. Everton, who suffered defeat on the road for the first time in four matches, stay 12th.

Tottenham thrashed Everton 5-0 in this fixture in March but Frank Lampard’s side – boasting the joint-best defensive record in the division ahead of kick-off – have proven to be more resolute this season.

Their gameplan was clear from the first whistle, with Dwight McNeil dropping into a left wing-back role to add extra defensive cover in a 5-3-2, and the visitors were able to limit Tottenham to barely a handful of half-chances in the opening period.

There was a header over from Richarlison, a half-hearted penalty shout from Heung-Min Son and a deflected shot from Kane but no real threat on Pickford’s goal. Instead it was Everton who had the best openings before the break.

First Gray blasted over after he rolled Rodrigo Bentancur to get in on goal from a long ball. Lampard’s frustration on the touchline was plain to see but he was doubly incensed just before half-time when a mix-up between Cristian Romero and Hojbjerg in midfield allowed Onana to storm through and send an equally woeful finish into the stands.

In between those big chances, Pickford was alert to smother a Kane run in the box and beat Son to a through ball before Richarlison saw a deflected effort from distance spin wide but Spurs – back in action at their home ground less than 72 hours after beating Eintracht Frankfurt in the Champions League – were flat and short on spark.

Richarlison scored 53 goals in four seasons at Everton but that would be his last major contribution to a game he would have been relishing, as he was frustratingly forced off with injury just five minutes into the second half. Yves Bissouma came on in his place – and soon after a rejig in formation Spurs were ahead.

Pickford showed lightning reactions to keep out a Kane effort but with the home side’s next attack he fumbled a routine stop from Doherty and lost the race with Kane for the loose ball. There was no stopping Kane’s drilled finish and he celebrated just as emphatically in front of the huge stand of Spurs supporters behind the goal.

Everton’s struggles against Spurs go on

Tottenham have lost just one of their last 20 Premier League encounters against Everton (W10 D9), winning more games (29) and scoring more goals (97) against the Toffees than against any other side in the competition.

Kane tried for a second as a buoyant Spurs pushed forwards but it was Hojbjerg who proved to be the unlikely match-clincher. With Everton pushing on there was space at the back when Bentancur sent the ball across the edge of the area and the Denmark midfielder clipped in a shot off Alex Iwobi to seal the three points, before making a tribute to the club’s late fitness coach Gian Piero Ventrone with his celebration.

Sky Sports’ Jamie Redknapp praised Antonio Conte’s decision to send on Yves Bissouma for the injured Richarlison early in the second half and switch from 3-4-3 to 3-5-2.

“The manager deserves credit,” said Redknapp. “Conte made a good substitution at a time when the game was going nowhere – it looked to be petering out. He could have brought on Bryan Gil or Lucas Moura when he lost Richarlison but he decided to thicken up the midfield and push the wing-backs up. It was hard for them in the first half as they were getting outnumbered in midfield. If you get more bodies in there you can control the game.” 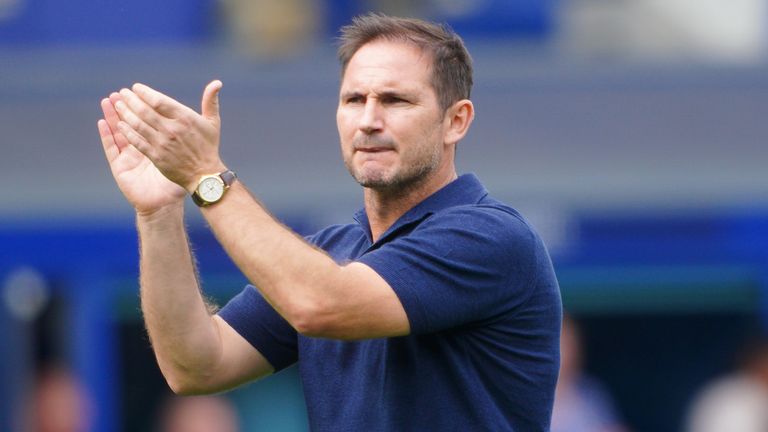 Everton boss Frank Lampard to Sky Sports: “We were really disciplined, especially in the first half. The biggest threat in the first half were their set pieces but we defended well. Then we had two great chances. It can be the difference against teams at this level. If we took one of those, we probably don’t lose the game. We came out in the second half slightly off it and allowed them to get some momentum but the penalty was the difference in the game. Until that point everything we were doing was really good.

“They’re in the Champions League and we’re trying to go from where we were last year and move up the table.”

Speaking in his press conference, he added: “If we finish our chances we could be 1-0 or 2-0 up. We restricted them with our performance in the first half.

“In terms of the manner of the goals, every goal you concede is disappointing. Jordan is an amazing goalkeeper for us, circumstances are what they are. The second one we were pushing to get back into the game.

“On another day we take our chances and it looks different. Nobody wants to go through and miss a chance – sometimes the cool head of being there and seeing it regularly makes you more clinical in those moments – look at Harry Kane. Maybe some of that is a reality of where we’re at. We want to get more clinical.” 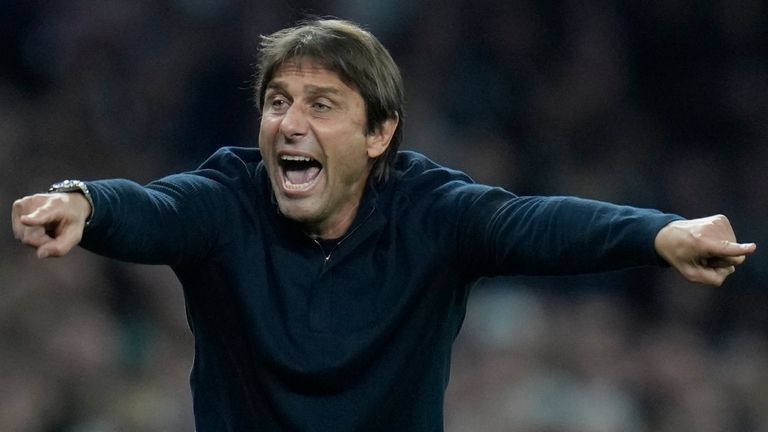 Tottenham boss Antonio Conte: “I was not surprised but to see the intensity we played with tonight in this game it was for me really positive because it means if you work in the right way the performance of your player is always up.

“We played only two days ago but I’ve seen my players run from the start to the end and I’m really delighted especially for the players because this performance repays the effort they do every day in the training session.

“I changed the system for the characteristic of this squad, we can play with three strikers or with three midfielders and at that moment I preferred to pick Bissouma because Lucas Moura is only one week working with us and in this moment his physical condition is not at the top and we needed to play 40 minutes and for this reason I decided to pick Bissouma. The other option was Gil but he’s young, a good prospect who is improving, but at that moment we needed a player more prepared, also to be strong physically – Everton is a team really strong physically. After the win, I think my decision was good.

“I’m really happy for our fans. When you play and have an unbelievable atmosphere and they sing our names and make us proud about it, they give us a lot of push to give more and more for this club.”

Harry Kane is flying right now – and Gareth Southgate will be hoping his star striker is still in this form come mid-November when England fly out to Qatar. His ninth goal in 10 Premier League games set Tottenham on course for victory and he was excellent throughout. 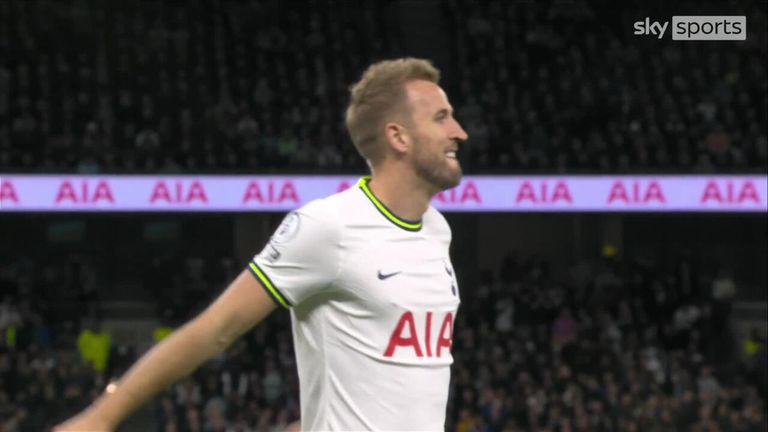 Jordan Pickford prevented him from adding to his tally, with one stop in particular a real stunner, but his mistake for Spurs’ opening goal was a frustrating slip-up and the kind of mistake he cannot afford to make at the World Cup. “It was a good battle,” Kane said of their duel. “He made a couple of good saves then I stuck the penalty past him!”

Elsewhere, there were solid performances from Eric Dier and Conor Coady, who will be hoping to claim a centre-back slot.

Tottenham are back in action on Wednesday when they travel to Old Trafford to take on top-four rivals Manchester United, with kick-off at 8.15pm.

Antonio Conte’s side then return to the Tottenham Hotspur Stadium on Sunday to host Newcastle – live on Sky Sports – with kick-off at 4.30pm.

Everton are also on the road in their next game, with the Toffees heading to St James’ Park to take on Newcastle on Wednesday – with kick-off at 7.30pm.