When it comes to Halloween, pastors have opinions, according to new survey

Not all who harm the church are wolves. Some are renegade…

(RNS) — How do Christians celebrate Halloween?

It might depend on their pastor, according to a survey, released Tuesday (Oct. 18), by Lifeway Research of Protestant Christian pastors from all across the United States.

More than 90% of pastors encourage their congregations to observe Oct. 31 in a particular way, but that ranges from avoiding Halloween completely to inviting people to Halloween-adjacent events at their churches, the survey found.

“Few pastors simply ignore the fact that so many Americans participate in Halloween celebrations,” Lifeway Research Executive Director Scott McConnell said in a written statement. “Most pastors focus on the social nature of these celebrations, encouraging their congregations to engage with others outside their church.”

Many children across the U.S. celebrate Halloween by dressing in costumes and walking door to door to neighbors’ houses requesting candy with a cheerful, “Trick or treat!” Carving pumpkins into jack-o’-lanterns, watching horror films and visiting haunted houses are other popular pastimes during the spooky season.

Some pastors (13%) discourage their congregations from participating in the holiday in any way, according to the survey. This could be because some Christians consider the day’s festivities to be evil — or, at least, to glorify evil.

But a growing number of pastors are encouraging their congregations to engage with the celebration, mostly by inviting their friends and neighbors to church events on and around Halloween. Those events can include fall festivals; “trunk or treat” gatherings that allow kids to collect candy from cars parked in the church parking lot; or judgement houses, also known as hell houses, that aim to scare the hell out of visitors by depicting its horrors.

“Whether it comes from a desire to reconnect with their community after the pandemic prevented much of this or from deepened convictions about the holiday itself, pastors appear more resolute in their convictions around Halloween,” McConnell said. 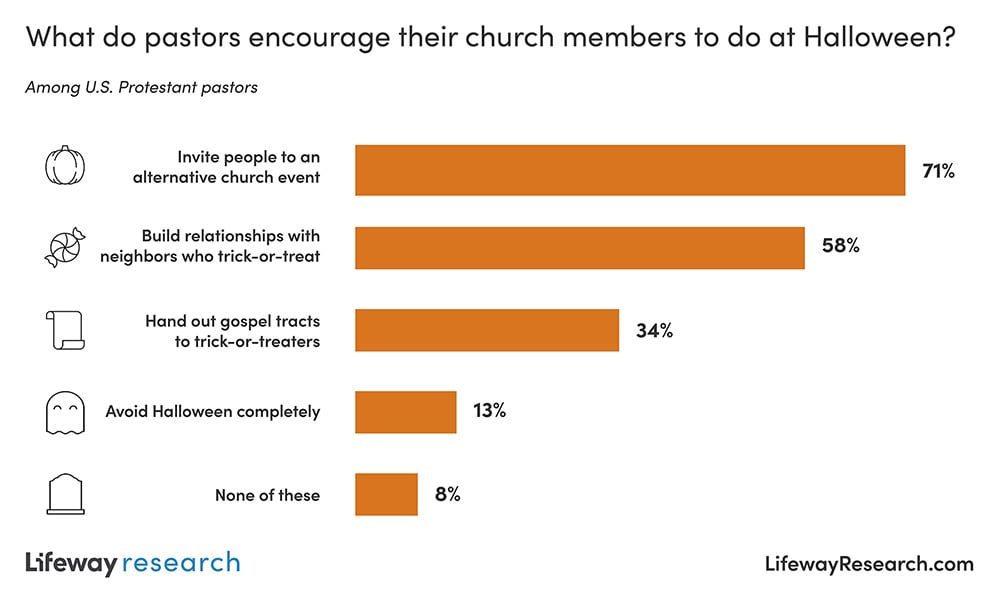 “What do pastors encourage their church members to do at Halloween?” Graphic courtesy of Lifeway Research

The number of Protestant pastors encouraging congregants to invite others to church events has risen from 67% of pastors in 2016 to 71% in 2022, according to Lifeway.

Many pastors (58%, compared to 52% in 2016) also are talking with members of their churches about building relationships with neighbors who trick or treat, the survey shows. Those numbers are highest among the youngest pastors, ages 18 to 44 (66%), and among Methodists (68%) as opposed to Pentecostals (42%).

Some — mostly Baptist (58%) — tell congregants they should hand out gospel tracts to children who ring their doorbells on Halloween night. Pastors of churches in evangelical denominations (42%) were more likely to make this suggestion than those in mainline denominations (28%).

That number has had the biggest jump, from 26% to 34% of all Protestant pastors.

Lifeway is the publishing and research arm of the Southern Baptist Convention. It surveyed 1,000 Protestant pastors by phone between Sept. 6 and Sept. 29. Responses were weighted by region and church size, with 95% confidence that the sampling error does not exceed +3.2%.

RELATED: In ‘Hocus Pocus 2,’ Disney takes the panic out of witchcraft

Holiday Gift Ideas for Pets and the People Obsessed With Them

Not all who harm the church are wolves. Some are renegade sheep.