‘The Heist’ focuses mainly on Gavin, Eve, Izzy and Sam’s attempt to hijack a shipment of rock travelling from the Exiles to Lazarus. Unfortunately it’s an episode of more of the same from these characters. There’s repeated rehashing and discussion of the Gavin-Eve-Levi triangle and Sam is never given anything to say other than that he needs to get his daughter back. It’s a worthy and understandable goal for the character but Jon Seda as an actor is capable of so much more than what the show’s giving him.

The other storylines in the episode were more interesting. Scott got some good character development in regards to his fear of losing people and not being able to help them. I love how far some characters like Scott and Lucas have come because of being in 10,000 BC though Lucas’ heroic streak seems to be bordering on self-sacrificial tendencies, a stark and deliberate contrast to Scott’s fears of not being able to protect people he cares about.

The biggest reveal of this episode came from the revelation that Taamet is Paara’s presumed dead husband who was cast out after a failed takeover of their tribe. Honestly, with the reveal of her backstory earlier in the episode, I should have seen this coming a lot sooner than I did. It’s a decent set up for further conflict between the various communities surviving in 10,000 BC while the more major characters drive forward the futuristic element of the story. 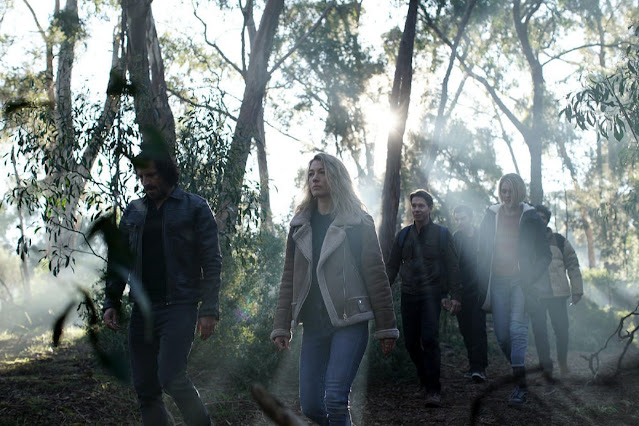 Speaking of the future, this episode took great strides in progressing the plot, giving Gavin a reunion with his shady father who used some pretty textbook manipulation tactics to try and get Gavin to trust him only to have it almost immediately blow up in his face. I do get the impression that he cares about Gavin but Silas doesn’t hate him so viscerally without a reason.

It’s also pretty clear that Lazarus are the ones hunting Caroline. It’s not a good sign as she’s the one in the organisation trying to prevent the sinkholes. Gavin’s dad spouts a lot about saving the future from famine and extinction but if their efforts are resulting in sinkholes, there’s not really going to be much left to save if they end up destroying the past in the process.

I have to say, I’m pleasantly surprised that the reunion with Josh and Riley happened in this episode. I was worried it was going to be an event they ended the season on. They’re going to be ending up back in 10,000 BC at some point but I’m excited to see if and how they stop a sinkhole from appearing in 1988. The only downside is Levi is more of a loose end now as the only person in 1988 not a part of either the Velez or Harris family. It seems a shame that he’s only ended up being a glorified plot device.

What did you think of these two episodes? Sound off in the comments below!