UEFA has opened a formal investigation into Juventus for potential breaches of its club licensing and Financial Fair Play regulations.

Prosecutors in Turin, where the Juventus club is based, have been investigating the group’s accounting and statements made to financial markets over the past three years.

They have been looking into the values ascribed to player transfers between clubs and whether, as stated, salaries were sacrificed during the COVID-19 pandemic or simply deferred.

Juventus said on Wednesday that the allegations of the public prosecutor’s office “do not appear substantiated nor aligned” and they “remain convinced that the club has always acted correctly”.

Earlier this year, Juventus was among eight clubs that settled with UEFA after failing to comply with break-even requirements last season.

UEFA’s statement says that prior settlement could be nullified and that it could take legal steps it may deem appropriate and impose disciplinary measures in accordance with the UEFA CFCB procedural rules.

A UEFA statement read: “The CFCB First Chamber has today opened a formal investigation into Juventus FC for potential breaches of the Club Licensing and Financial Fair Play regulations.

“The CFCB First Chamber investigation will focus on the alleged financial violations that were recently made public as a result of the proceedings led by the Italian Companies and Exchange Commission (CONSOB) and the public prosecutor in Turin.

“In the event that, after conclusion of this investigation, the club’s financial situation was significantly different from that assessed by the CFCB First Chamber at the time the settlement agreement was concluded, or if new and substantial facts arise or become known, the CFCB First Chamber reserves the right to terminate the settlement agreement, take any legal step it may deem appropriate, and impose disciplinary measures in accordance with the applicable UEFA CFCB Procedural Rules.

“The CFCB First Chamber will cooperate with national authorities and will make no further comment on the matter while the investigation is ongoing.”

Juventus president Andrea Agnelli and rest of club’s board resign

The news of UEFA’s investigation comes just two days after the entire board of directors at Juventus, including president Andrea Agnelli, resigned.

The collective resignation came after Juventus’ financial statements underwent scrutiny by prosecutors and Italian market regulator Consob in recent months for alleged false accounting and market manipulation. The company has denied any wrongdoing.

Furthermore, Juventus published an annual loss of £220m for last season – a record-breaking fee in the history of the club. 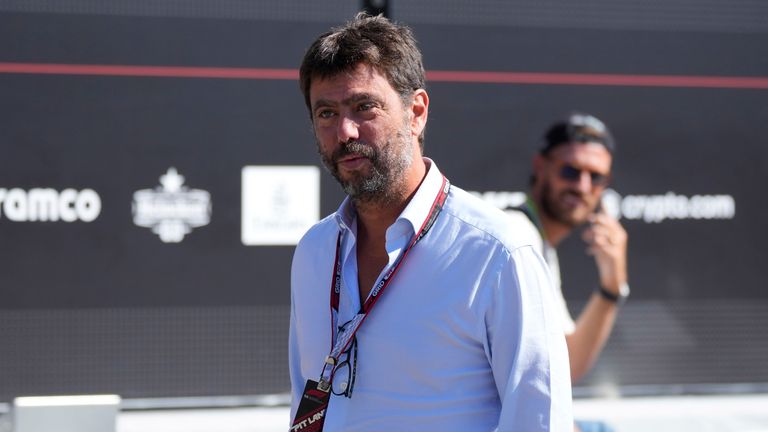 Journalist Mina Rzouki outlines why the whole Juventus board have resigned, with an investigation having been launched into the club’s transfers.

A Juventus statement read: “The Board of Directors, considering the focus and relevance of the pending legal and technical-accounting issues, have deemed it in the best interest to recommend that Juventus adopt a new Board of Directors to deal with these issues.”

Alongside Agnelli, vice-president Pavel Nedved also offered his resignation as did chief executive Maurizio Arrivabene – but Juventus asked the latter to remain in his position to transition over to the next board of directors.

“[Ferrero] has solid experience and the necessary technical skills, as well as a genuine passion for Juventus, which make him the most suitable person to hold the position,” a Juventus statement to the Stock Exchange said.

Juventus have also confirmed that Maurizio Scanavino will take over as general manager, while the vacated directorships remain unfilled as candidates are sought. The club are set to hold a shareholders’ meeting on January 18 when all roles will be filled.

The northern Italian side’s share price dipped almost five per cent in morning trading on Tuesday and the value of the club is at its lowest since 2017.

Tottenham sporting director Fabio Paratici has been named in an indictment request from the magistrates of the Turin prosecutor’s office in Italy.

The request is part of the Prisma investigation into Juventus’s financial statements between 2019 to 2021 and includes 11 other former club directors, as well as the club itself as a legal entity.

The investigating judge must fix a hearing in which they will decide whether to accept the indictment and go ahead with the process, or issue a decree of ‘no place to proceed’, within the next few days.

Also in this named group are ex-Juve president Agnelli, former vice-president Nedved, former chief executive Arrivabene and board member Roncaglio, who all resigned from their positions on Tuesday along with the rest of the Juve board.

Tottenham – Paratici’s current employers – did not comment when contacted by Sky Sports News.

On Tuesday, the Spanish league issued a statement demanding “immediate sports sanctions” be applied to Juventus, noting that it had filed a complaint with UEFA in April for Financial Fair Play breaches.

“As part of its campaign to promote financially sustainable football in Europe, LaLiga continues to pursue these complaints against Juventus and demands immediate sporting sanctions to be applied on the club by the relevant authorities,” said a statement from LaLiga.

“LaLiga has long been a major proponent for the implementation, application, and enforcement of strong financial sustainability rules in football.

“The Spanish competition itself has applied its ‘economic control’ rules for nearly a decade, at the request of the clubs that make up the league.

“Financial sustainability is paramount to protecting the business of football.”

Under The Bridge – Riley Keough To Star